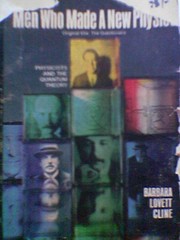 I finished reading this book on Monday. It is an excellent book which deals with the stories of many physicists working during the prime time of physics. It starts with RutherFords story about his rustic nature and how he used to work in his lab.
I was amazed by the story of Max Plank that I have decided to keep Max Plank as an example of being organized and disciplined in life.
Max Plank was very organized it seems. He used to come to lab, almost at the same time and daily he had set 1/2 hour of learning piano and work style was appreciated by many. Einstein and many others respected and loved him and addressed as "our plank". Later in Einsteins story came to know that Einstein resigned from post in Germany during the troubled Nazi area, as knew that it would come up on Plank to take the decision of removing Einstein and Plank would be feeling uncomfortable doing it. Einstein then had moved to Princeton and German political situation was bad under Hilter.
One funny thing, I can recollec is, in of the anti Einstein meetings, Einstein was present in the audience and enjoying it.
Niels Bohr is another scientist whom we come to know in detail. He along with Einstein was the primary characters in this book. Bohr had established an institute where lots of young physicists loved to study and conduct experiments. Physicists who ever had been there feel it was the golden era. The final topic is on Einstein and Bohrs debate, Einstein feels that there is an organized approach in God design of universe wherein Bohrs point of argument ( as I understood) is we have not understood the organization of universe yet to comment on it.
Bohr was an athelete and used to go for short sprints between scientific discussions and debates it seems. :-)

Many of my friends will enjoy this book. Jonathan gifted me this while at college and Kannapan feels this as one of the best book he has ever read.

I took some snaps of the middle page pictures using my nokia 6600.