Oxford Comma is the final comma in the list of things mentioned in a sentence. In this statement,

The comma after the word maths and before the conjunction, and, is considered the Oxford comma. Other commonly used terms that refer to this style are the serial comma, a series comma, or a Harvard comma.

In my writing, before this essay, I had never added a comma on the final element of the conjunction. This topic piqued my interest, and I started doing research on this entity.

The term, Oxford comma, got its name from the Oxford University Press style guide. It was recommended by the Oxford style guide even when many British journals and publications were not recommending it. My first conscious encounter with it was during the diagnostic test. I was not able to correct the sentence by placing a serial comma. I had never considered a statement, with a list of items, wrong if it did not have a serial comma. We always try to infer the meaning from the context. But in fact, as will see shortly, it may not be possible at all times and the reason to include Oxford comma is to reduce ambiguity in the sentence.

The reason we do not notice the lack Oxford comma is, the Associated Press style guide, which many newspapers follow, does not require us to use Oxford comma, and thus, it is often left out. Let's notice an ambiguity when we lack the Oxford comma.

To my parents, Alicia and Steve Jobs.

To my parents, Alicia, and Steve Jobs.

It articulates clearly that the writer is referring to 3 separate entities in his dedication. There are cases when inclusion of Oxford comma can make a sentence ambiguous too. For example, this statement:

To my father, Steve Jobs, and Alicia.

To my father, to Steve Jobs, and Alicia.

Thus, the placement of the comma can significantly affect the meaning of the entire sentence. By appropriately choosing words and with always using Oxford comma, we can write less ambiguous phrases. Also, Oxford comma matches with the spoken cadence of sentences better.

If you need only one reference to remember this concept, then keep this picture in your mind. 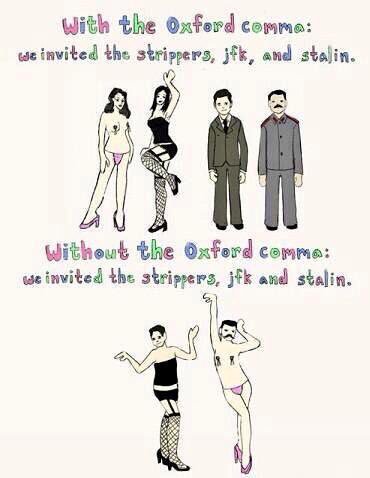 Listen to "Weird Al" Yankovic - Word Crimes before you move beyond this page.